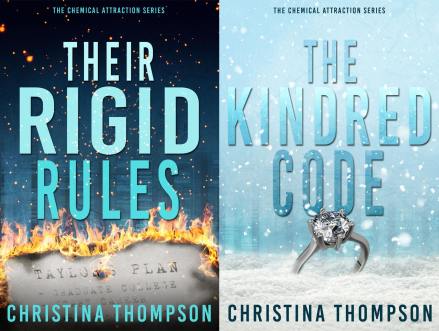 I’ve had the privilege of getting to know the people in The Chemical Attraction Series. Taylor Valentine, Eva O’Sullivan, and Joe Roberts are siblings by choice. They’ve told me their story, and I wrote about their amazing journey. These interviews take place just after their adventure in Chemical Reaction. [trivial spoilers/no plot spoilers]

As a history professor and former Marine, Dr. Stuart Morgan, a blond, blue-eyed war hero, battles his inner demons. Although he longs for mental peace from an empathetic woman, his rigid rules prevent it.

In Their Rigid Rules, he meets Taylor in his Civil War seminar then throws out his strict rules to pursue her. Instead of sharing their personal struggles in The Kindred Code, they drift further apart. In Chemical Attraction and Chemical Reaction, Stuart and Taylor remain supportive of Joe and the rest of their family. Today, Stuart answers a few questions for the fans of the Series.

CHRISTINA: Will we ever hear your military story that won you a medal?

STUART: Yes, Taylor and I discuss it in The Kindred Code. I had a hard time putting that time in my life behind me. Thankfully, I have Taylor and the rest of the family for support.

CHRISTINA: What do you do to cope with your PTSD?

STUART: It’s not something a lot of people know about. Although medication has helped many, I don’t take any because I don’t want that to be an issue with my job. Unfortunately, it would give the university president more ammunition against me. The negative connotation of perceived violence is why many vets with PTSD don’t seek medical help … myself included. Support from my family helps, and I work out every day at the gym. Although my symptoms have lessened, I still have occasional nightmares and panic attacks.

CHRISTINA: Are you and Matt Connor friendly? We haven’t seen much interaction between the two of you in the stories.

STUART: We’re married to sisters so, yeah, Matt and I hang out a lot. Joe’s usually there, too. He’s a smartass. Matt and I keep him grounded and enjoy giving him a hard time. Joe’s like our annoying little brother.

CHRISTINA: Have you and Joe worked out your issues over Taylor?

STUART: I worked out my issues with Joe a long time ago. It took him a while longer. Joe protected Taylor for much of her life. He focused on his career, which, I think, helped his transition with the changes. Joe cares about his sisters. You can’t fault him for that.

CHRISTINA: On a lighter note, are any of the football players in your history classes?

STUART: All of them are. It’s a requirement. Taylor once met me as my class let out. Talk about awestruck. She went gaga. The guys were all about meeting her because of our notoriety. She impressed them with her knowledge of the game. She even lectured the offensive linemen on their tells which gave away their blocking direction. I don’t tell Taylor when that class is. My students don’t need the added distraction, and I don’t need the competition.

CHRISTINA: Thanks for joining me today and giving the fans a look into your life. To read more about Stuart and Taylor’s romance, check out Their Rigid Rules and its sequel, The Kindred Code.