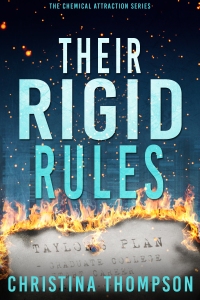 (Book 1 of The Chemical Attraction Series)

Taylor Valentine, a senior at Western Michigan University, has had her life planned out since kindergarten. After her parents died while she was still in high school, she had perfected it to make them proud.

Now with the help of her best friends, Joe and Eva, she focuses on graduation and a career—romance in the far distant future. However, when the visiting professor enters the lecture hall, her perfect plan hits a snag.

Handsome history professor and former Marine, Dr. Stuart Morgan keeps infatuated students at a distance using his own set of strict rules. This time, he’s unnerved by his reaction to Taylor. When death threats upend his boring life, he inadvertently puts her in danger.

With pressure from family and foe pulling them apart, Stuart wonders if they can sustain the stress. Trusting their love, he must somehow convince Taylor to break her rules and embrace a new plan. 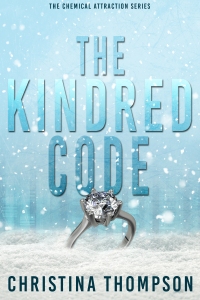 (Book 2 of The Chemical Attraction Series)

Taylor Valentine, Eva O’Sullivan, and Joe Roberts are siblings by choice. They believe in The Kindred Code: blood means nothing and love is everything. As their lives follow different paths after college, they wonder if their mantra will stay true.

When word gets out that Professor Stuart Morgan had dated Taylor while in his class, the publicity takes a toll on their relationship. Under the stress, Stuart struggles with his PTSD.

With his son at a sleepover, Officer Matt Connor invites Eva to his home. Over the weekend, volatile confrontations erupt between Matt’s mother and Eva. The rural town enjoys the uproar.

Director Peter Bingaman asks for Joe’s help on an unofficial case. Joe jumps at the chance to test his skills. Before long, they uncover horrendous crimes. Suddenly, Joe’s in over his head.

Will Joe’s family put aside their problems and come to his aid before it’s too late?

(Book 3 of The Chemical Attraction Series)

Working in nanotechnology, Madeline Pierce, a dedicated scientist, has pain in her heart from an abusive relationship. She hides in her research. Charismatic yet brooding, Joe Roberts searches for an instant chemistry with his soulmate, the one person who will love him for his faults not in spite of them.

Dr. Pierce teams up with Agent Roberts to uncover a criminal network within her medical research facility in West Michigan. Feeling an undeniable attraction, they struggle to stay professional while they determine the degree of company involvement.

In the nearby farming town, animals violently attack the residents. Someone is experimenting outside the laboratory. Are human test subjects next? With the help of Joe’s sister Eva, a physician assistant at the local hospital, and her husband Chief Matt Connor, Joe and Madeline hunt for this new bio-weapon before the death toll rises. 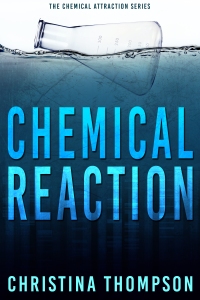 (Book 4 of The Chemical Attraction Series)

FBI Agent Joe Roberts and Dr. Madeline Pierce must track down a rage-producing nano-drug before it devastates the nation.

Staying in Detroit with the FBI, Madeline works to develop an antidote from the confiscated journals. She clashes with the women from Joe’s past. In West Michigan, Joe hunts for the bio-weapon. With a history as a player, he’s worried his relationship with Madeline is at risk. Working apart, they attempt to focus on the threat.

Before Joe returns, agents are killed, Madeline is abducted, and the deadly nano-drug is put on the market. While she plays a dangerous game of deceit, Joe struggles to put his fears of losing her aside to find the weapon first. Her life, their future, and the nation’s security are in jeopardy. Joe must now choose between his personal desire and his professional integrity. Can he live with the consequences?