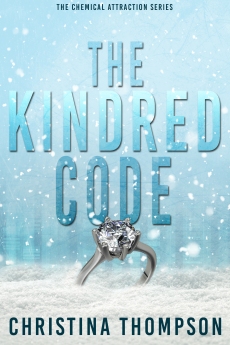 Mark your calendars for the release of The Kindred Code on Wednesday, July 19th. In the meantime, enjoy the excerpt between Joe and Eva, who are siblings by choice. They tease, harass, deflect, and know each other so well…

Excerpt from The Kindred Code

Joe backtracked and finally found Matt’s house, a plain, well-kept country blue ranch with a two-car attached garage and a chain link fence in back half buried in the snow. In the neatly shoveled driveway, Matt’s old Bronco had also been cleared. Joe stopped beside it then blew out a breath in relief, glad to be done with the long drive on the slippery back roads.

“Crap,” Eva said, searching through her brown leather purse. “He gave me a key and I forgot it.”

“Damn it, Eva. I’m not going back,” he replied, flexing his fingers to ease the ache from his tight grip of the steering wheel. “Maybe he has one hidden somewhere.”

She laughed. “Here,” she said, holding it out for him. “You’re the one who needs to lighten up.”

He ripped it from her hand. She continued to laugh as he walked around the car to help her out. She handed him her purse and mittens then struggled to stand on her own, despite the walking boot cast on her right foot. Stubborn as always. With a sigh, he filled his arms with her crutches and suitcase from the back seat.

Taking the crutches, she started hopping toward the front door. Matt had shoveled the walkway bare, too, and rock salt covered every cement surface. Matt was definitely a responsible guy. Joe chuckled as he followed her.

Eva held out her hand for the key. “Just drop my purse and suitcase inside then you can leave,” she said, unlocking the door.

“No way. What kind of brother would I be if I didn’t look around and make sure he’s not some psycho?” he asked.

Inside, Eva turned and glared at him. “He’s a cop and a wonderful father who owns his own home.”

“You do need to lighten up. I was kidding, except for the snooping part.”

In the living room, Joe set her suitcase, purse, and mangled mittens beside the worn yet comfortable looking sofa. Under one end table, he spotted a wicker basket with yarn and a partially crocheted blanket.

“How domestic do you want to be with this guy? Crocheting? Really?” Joe said with a chuckle.

“Aren’t you going to be late?” Eva replied.

“Nope. I’ve got time.” He walked toward the kitchen on the right.

The plain white kitchen had enough room for a square wooden table and four chairs. David’s school paintings on the refrigerator added the only color to the room. To annoy Eva, Joe opened a cupboard above the bare countertop.

“Joe, stop,” she said, leaning on the back of one of the chairs.

“Do you really want to get tied down with a kid?”

Opening the fridge, he found it overflowing with Tupperware containers. He pulled out the closest, lifting the lid to see what was inside. His mouth watered at the macaroni salad. He quickly found a spoon in the drawer. After taking a huge bite, he moaned and held out a spoonful for Eva.

“This is so good,” he mumbled with another mouthful.

“I think his mom made it. His parents live across the street.” She hopped to the lid on the counter and held it out for him to cover the bowl. Instead, he walked around the table, making her hop after him.

“Sounds like Everybody Loves Raymond,” he said, before taking another bite.

“Have you talked to Taylor today?”

“No,” he replied, taking the lid she thrust in his face. “She’s not my problem anymore.” He shoved the container with its lid back into the refrigerator.

“Not your problem? She’s your family.”

“You know what I mean. She’s with Stuart now.” Leaving the kitchen, he headed down the hallway and glanced in David’s dinosaur-themed bedroom. In the guest room next to David’s, six boxes of toys and books rested on the bed beside two police uniforms lying across an ironing board.

“Do you want to talk about her?” she asked at his heels to keep him from snooping too thoroughly.

“This place is void of a female touch. Are you gonna decorate right away or wait until you’re living here?”

“Peter’s going to make you wear a suit everyday with the FBI.”

Before Joe could add another retort, he and Eva heard a bang then a rattling from the basement. Joe whispered for Eva to go into the bathroom and lock the door. Rolling her eyes, she shook her head while Joe opened the basement door. The rattling vibrated the steps as Joe carefully descended. Eva hopped down behind him.

Beside neatly packed boxes on metal shelves that lined the perimeter of the small clean basement, an old furnace shook. At closer inspection, Joe found a large wrench sitting on the water heater and a slight dent in the furnace beside it. He banged the wrench into the dent and the rattling stopped. The heat popped on.

Eva snorted and hopped back up the stairs huffing as she went. When his cell rang, Joe checked the caller ID. He let Taylor’s call go to his voicemail. Eva watched him.

“You need to work through your feelings for her,” Eva said.

“And, on that note, I’m out of here.” She was right, but he wouldn’t openly admit it.

Using her crutch, Eva poked him in the back, stopping him. “I love you, Joey.”

“Stay out of trouble,” he replied, giving her a hug, “although nothing ever happens in these farming towns.”

ADD The Kindred Code to your GOODREAD’s Reading List

AND sign up for my newsletter and get a reminder:

(Signing up automatically enters you into the drawings for all my giveaways.)

2 thoughts on “Siblings by Choice”